Skyrmion: Book One of the Sweetland Quartet, received this fine review from the Publishers Weekly BookLife editors who awarded it an Editors’ Pick.

From the editors of BookLife:

In this immersive, intricately plotted mystery set in a near-future dystopia, Poncy (Bartlett House) challenges the concept of reality versus simulation. In 2035 the American government is owned by a corporate oligarchy that has privatized all services, leaving devastating poverty in its wake. Citizens spend their time on the internet-like Grid inside the New Life virtual reality world. But when Seattle private investigator Bridge Whitedeer—known as Claire Deluna in New Life—follows the trail of several bodies, she stumbles on a string of computer code called Skyrmion, which is designed to shut down the Grid and destroy the American economy. 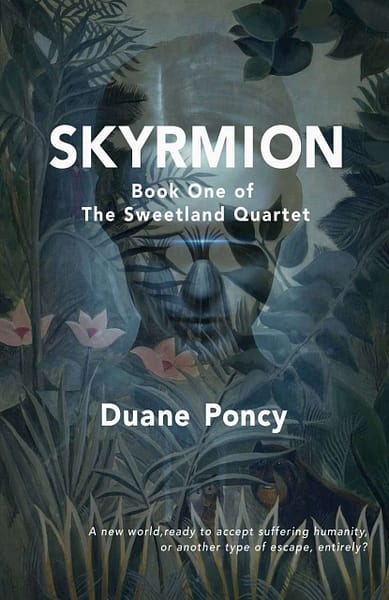 An intricate, cyberpunk dystopian thriller that will keep readers engrossed.

With confident prose and a diverse cast of characters with fully realized back stories, Poncy’s well-plotted, complex thriller–the first book of The Sweetland Quartet–amps up the clash between virtual existence and reality. The planet is flooding, food is scarce, and the world is on the verge of a war over water. Joe Larivee, an overwhelmed social worker unable to help the drug-addicted masses, learns that his 14-year-old daughter Jessie is trying to get to an environmental community called Sweetland, a utopia that promises a new beginning for humanity. But Bridge gets conflicting information: is Sweetland a habitable pristine planet, a way to upload human consciousness to a giant database, or just a guerrilla marketing campaign to improve the New Life brand?

Poncy excels with evocative world-building and connections between characters that keep readers immersed and guessing until the end. The morality facing the characters who want to flee to the promise of Sweetland rather than try to fix the problems in front of them, offers a stark reminder to readers: “We always build a level of abstraction, a simulated bubble of denial around ourselves to protect us from the consequences of our decisions.” This is a treat for cyberpunk and science fiction fans who like smart characters maneuvering through introspective epics.

Production grades
Cover: A
Design and typography: A
Illustrations: N/A
Editing: A
Marketing copy: A

Duane Poncy is a lifelong political, social and literary activist. He lives and writes fiction in Portland, Ore­gon, where he lives with his wife, Patricia. His latest novel is Skyrmion: Book One of the Sweetland Quartet. He is also the co-author, with Patricia J McLean, of Bartlett House, A Will Adelhardt/Lucy Hidalgo Mystery, and the forthcoming Ghosts of Saint-Pierre. He is an enrolled citizen of the Cherokee Nation. Find me on Mastodon: @duanep@writing.exchange.

View all of Duane Poncy's posts.

Manage Cookie Consent
We use cookies to optimize our website and our service. We neither collect nor share identifying information.
Manage options Manage services Manage vendors Read more about these purposes
View preferences
{title} {title} {title}