Category: Book Reviews
Tags: books & publishing, fascism, fiction, Latin America, murders, review
Authors: Roberto Bolaño, translator Natasha Wimmer
Genre: Literary
Composed in the last years of Roberto Bolaño's life, 2666 was greeted across Europe and Latin America as his highest achievement, surpassing even his previous work in its strangeness, beauty, and scope. Its throng of unforgettable characters includes academics and convicts, an American sportswriter, an elusive German novelist, and a teenage student and her widowed, mentally unstable father. Their lives intersect in the urban sprawl of SantaTeresa?a fictional Juárez?on the U.S.-Mexico border, where hundreds of…

A book review of 2666 by Roberto Bolano

2666 by Roberto Bolaño centers around the fictional Santa Theresa, Mexico. On the U.S border, Santa Theresa is a city of maquiladoras and poverty where hundreds of women have been murdered. If this sounds like Ciudad Juarez, it is meant to, although it’s location corresponds more closely to Nogales, on the Arizona border.

The novel is divided into five parts, each with its own cast of characters, some interconnected. In the first part, entitled “The Part about the Critics,” three European academics travel to Mexico in search of mysterious and elusive Benno von Archimbaldi, a German novelist around which they all have built their careers. But Archimbaldi is never found and the critics leave, not sure if he was ever there at all. Ever in the background are the murders, like a news item in the morning paper.

The murders remain in the background until the third part, in which an African-American reporter from New York, in Santa Theresa to cover a boxing match, learns of the crimes and unsuccessfully tries to get permission from his editor to stay and investigate. In part four, we finally come to “The Part about the Crimes.” Interspersed with stories of the policemen who are assigned to the cases, Bolaño details one murder after another, as though they were being read from the police blotters, until the true horror of the crimes begin to sink into your subconscious. Finally, in the last part, “The Part about Archimbaldi,” we are given the story of the German novelist, who was a soldier on the Eastern Front in World War II, and witnessed the horrors of the Nazi regime. This section is almost fairy-tale like, but it is a dark, terrible fairy-tale about genocide and the atrocities of war.

2666 is hypnotic and dreamlike as the author segues through the lives of dozens of characters, sometimes hilariously, and sometimes in a dark, twisted journey of horror. The novel ends as Archimbaldi is leaving for Mexico to help his nephew, imprisoned and charged with killing four women. But there is no ending here, just a story which appears to stop in the middle, unfinished. This passage, describing the fictional writing of the fictional Benno von Archimbaldi, found near the end of the book, is a fair description of 2666, itself:

“The style was strange. The writing clear and sometimes even transparent, but the way the stories followed one after another didn’t lead anywhere: all that was left were the children, their parents, the animals, some neighbors, and in the end, all that was really left was nature, a nature that dissolved little by little in a boiling cauldron until it vanished completely.”

This is not a traditional novel with a beginning and neatly tied-up ending. It is more like a meditation on human nature, and how we humans rationalize and cope with the most horrible of crimes, and how our rationalizations (and complicity) end up biting us in the ass .

Near the end of the book, an old writer says to Archimboldi:

“I too believe in the intrinsic goodness of human beings, but it means nothing. In their hearts, killers are good, as we Germans have reason to know. So what? I might spend a night drinking with a killer, and as the two of us watch the sun come up, perhaps we’ll burst into song or hum some Beethoven. So what? The killer might weep on my shoulder. Naturally. Being a killer isn’t easy, as you and I well know. It isn’t easy at all. It requires purity and will, will and purity. Crystalline purity and steel-hard will. And I myself might even weep on the killer’s shoulder, and whisper sweet words to him, words like ‘brother,’ ‘friend,’ or ‘comrade in misfortune.’ At this moment the killer is good, because he’s intrinsically good, and I’m an idiot, because I’m intrinsically an idiot, and we’re both sentimental, because our culture tends inexorably toward sentimentality. But when the performance is over and I’m alone, the killer will open the window of my room and come tiptoeing in like a nurse and slit my throat, bleed me dry.”

For me, this passage most clearly sums up my understanding of what this novel is trying to say. Maybe you will read something different into it.

This is a difficult and complex novel in a number of ways, and may be of interest only to academics and other writers. At about 900 pages of dense prose, it took me about three weeks to read, but the subject matter, too, made this book a hard slog. Don’t get me wrong, it was worth every minute I spent with it.

Roberto Bolaño is a Chilean, who has lived much of his life in Mexico. The author died in 2004, and this book was published posthumously. 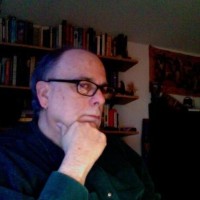 Duane Poncy is a lifelong political, social and literary activist. He lives and writes fiction in Portland, Ore­gon, where he lives with his wife, Patricia. His latest novel is Skyrmion: Book One of the Sweetland Quartet. He is also the co-author, with Patricia J McLean, of Bartlett House, A Will Adelhardt/Lucy Hidalgo Mystery, and the forthcoming Ghosts of Saint-Pierre. He is an enrolled citizen of the Cherokee Nation.